Smart Commit examples to use with Git and Automation for Jira

A selection of smart values make Jira issue details readily available for Automation for Jira rules. They enable customizing automation actions to be useful for your team and your customers.

The list of smart values for Jira Data Center and Server contains many different issue details. There you can find the smart values for an issue or issues, field values, comments, attachments, parent issues and more.

In contrary, there are no smart values for development out of the box! For example, you can't access Git commits (plus Subversion commits and Mercurial commits), tags, branches, pull requests, builds and deployments in automation rules. Atlassian provides those only for Jira Cloud.

In this article, we offer a practical approach to fill this gap. Our approach enables automations in software development projects also on self-hosted Jira deployments (both Data Center and Server).

The app adds DevOps automation triggers and DevOps automations actions to those offered by Automation for Jira out of the box. Each DevOps trigger makes relevant smart values available, related to commits, changesets, committer users, branches and more.

Get inspired by the below examples of how you can use these in DevOps automation rules!

The most popular DevOps smart values

This smart value represents the user who created the commit in the Version Control System. This is a valid Jira user account looked up either by the Git username or by the Git email address. (It works identically for Subversion and Mercurial, too!)

This DevOps smart value gives you access to a vast array of details about the complete changeset. A changeset is a set of changes pushed to the repository in one go, therefore it can contain multiple commits, tags, branches, etc.

This smart value provides the details of an individual commit. This is the smallest and possibly the most important part of a change.

By nested smart values you can get all the commit details, like:

The goal of Jira smart values is to be versatile and useful in many different automation use cases.

In the case of DevOps smart values, you can use those to include in communications to involved team members in the form of emails or Slack, Zoom, Microsoft Team and other messaging services.

Let's see some working examples! Don't forget, these Jira smart value examples work with Git and any other VCS out there!

How to send an email on commit with details

In this automation rule, the trigger is Changeset Accepted. The rule will be started when one or more commits are pushed to the repository and get accepted by the Better Commit Policy for Jira app.

The action is "Send email" with a custom email subject and custom email body. The formatting in the body is defined by standard HTML tags. The DevOps smart values are marked and numbered on the below image, so you can follow their explanation. 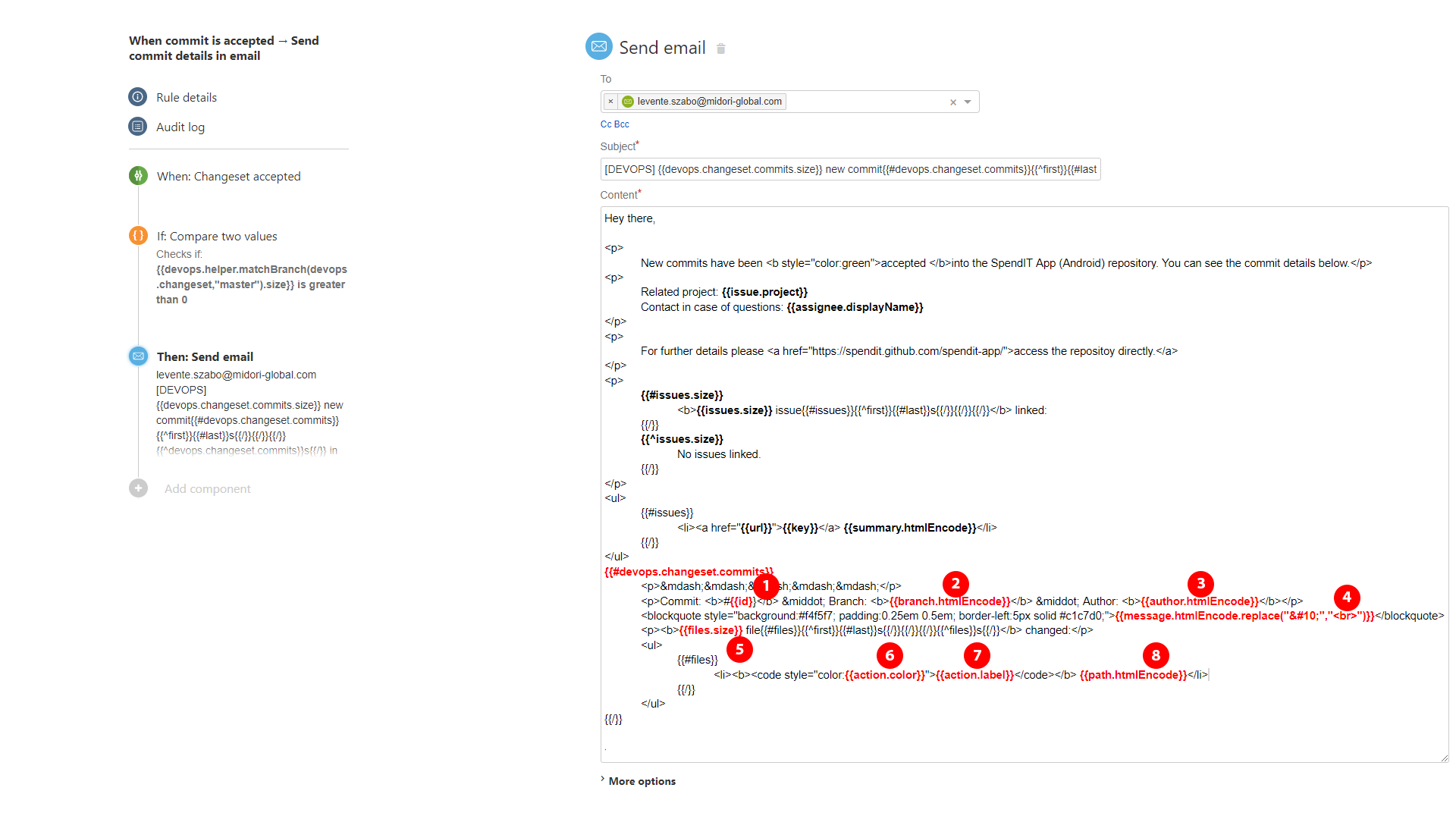 This is the email result, that is sent out automatically when a changeset is accepted:

To send out a Slack message when a new branch is created, you need to use the Branch Created DevOps automation trigger, that listens for new branches.

The action is sending a short Slack message with the new branch name, who created it and in which repository.

This is the Slack message result that is sent out automatically when a new branch is created:

Where else would you use your DevOps Smart Values?

These were samples of popular DevOps smart value use cases, but every team and DevOps workflow is different.

Let us know where would you use DevOps smart values! Get in touch now and ask, so we can help you implement the DevOps automation rule exactly how you need it!